In the last 3 years, the cruise line industry has been dealt blows that would have knocked out any other business. Starting in 2010 with the fire aboard the Carnival Splendor, followed over a year ago with the deadly incident of the Costa Concordia. This month, another fire broke out aboard the Carnival Triumph, causing over 3,000 people to be stranded at sea for several days, forced to live in unsanitary conditions reminiscent of a third-world country slum.

Yet, Carnival Cruise Lines, and the rest of the cruise industry continues to strive and attract more passengers than ever. Translation: the cruise industry is bringing record revenues and earnings despite tragedies blames on cruise employees (Concordia) and business decisions made by some of the richest executives who working in the leisure business.

In a recent op-ed piece published in The Globe, the writer discusses the role of the media in manufacturing horror stories, mainly stemming from the Carnival Triumph fire, while disputing that there even was an incident worth reporting about. Kyle writes: “The Carnival Triumph cruise was supposed to last four days, and go to Cozumel, Mexico. That was before the engine fire, which crippled the ship and knocked out its propeller system, as well as sewage and air conditioning, according to the New York Times. The worst part of the incident was the sewage that leaked and soaked the carpets throughout the ship. Other than that, the patrons of the ship were simply inconvenienced.” The author makes several comparisons between the Costa Concordia and the Carnival Triumph calling one a tragedy and the other a mere inconvenience. Kyle concludes: “I think that some of the passengers of the ship need to suck it up; it’s not like it was the Titanic.” 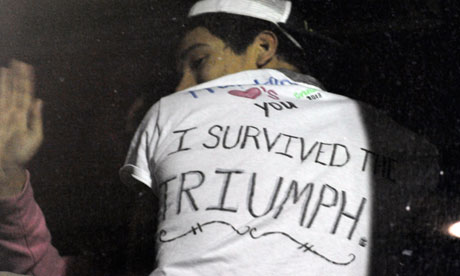 As much as the article minimizes the dreadful experience of the passengers and crew-members aboard the Triumph, the attempt is futile and misguided. Carnival certainly did not treat the incident as something they could sweep under the rug. However – and that is the important factor – Carnival would not have responded the way it did, had the media not blasted images of the stranded ship on cable news, not reported lived from Mobile, AL, when the ship returned safely to the mainland, not shown photos taken by passengers depicting the vile conditions aboard a luxurious cruise ship.

The reason why the media’s reporting is crucial in the aftermath of those cruise tragedies, is because passengers cannot bring light of their experience any other way than through the media. As discussed in our latest post “Can I sue Carnival Cruise Lines for the Carnival Triumph fire?” cruise lines have drafted iron-tight terms and conditions applicable to every single cruise passenger, that passengers have no outlet to voice their displeasure, or in the Carnival Triumph case, the dangerous and unsanitary conditions.

More importantly, The New York Times reported this week that, despite a similar fire in 2010, Carnival has failed to equip its ships with proper backup power systems. Cruise lines have made the business decision to maximize the numbers of boardable passengers to the detriment of safety. The vast majority of cruise ships currently floating on the planet’s oceans are not equipped with any backup system in case of a loss of power. As Jim Walker noted in his recent article, loss of power on a large cruise ship carries potentially fatal risks such as listing.

In case evacuating a stranded cruise ship becomes necessary, crew-members will not be able to lower the lifeboats without power. One can easily understand the gravity of such incidents, something The Globe’s reporter failed to fathom.