Ilija Loncar, a crewmember on a cruise ship, was feeling ill and reported to the ship’s doctor mid-voyage. Already feeling nauseous, Ilija threw up in front of the nurse. In response, the ship’s doctor ordered the maximum allowable dose of 25 mg Promethazine by intraveinous injection instead of the manufacturer recommended deep Intramuscular route.

Promethazine hydrochloride is a highly toxic caustic drug – The FDA requires the drug’s manufacturer to include a “black box” on the drug’s labels to warn medical providers about the risk of severe tissue damage if the drug is not administered correctly:

Intravenous Administration of Promethazine Has Been Associated with
Several Cases of Severe Tissue Injury, Including Gangrene,
Requiring Fasciotomy, Skin Grafts, And/or AMPUTATION.

The Preferred Method to Administer Promethazine
Injection Is by Deep Intramuscular Injection.

Healthcare Professionals Should Be Alert for Signs and Symptoms of
Potential Tissue Injury That Include Burning or Pain
at the Site of Injection, Phlebitis, Swelling, and Blistering.

The nurse carried out the cruise doctor’s misguided orders and injected the drug by pushing it himself through the IV port into the patient’s right arm. IV administration calls for a very slow push over the course of two minutes. Our client testified that the entire dose was pushed in his veins in a few seconds. Vascular expert witness, Dr. David Cossman, Director of Vascular Trauma at Cedars-Sinai Medical Center, testified that the fast push overwhelmed the normal A/V gradient forcing blood from the veinous system backwards into the arterial system, creating an arterial-like pattern of injury. 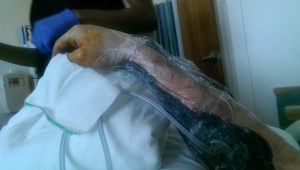 Immediately upon injection, Ilija complained of unbearable burning pain in his right arm at the injection site. Ilija compared the pain to tearing muscles off his bone. Despite voicing his pain, the nurse continued to push the drug into the arm’s vein. Ilija’s nightmare had just begun. Within three hours, the ever-increasing and continuous pain in Ilija’s arm began to show early signs of necrosis with erythema, tenderness, and cyanosis.

The cruise doctor never assessed Ilija’s arm until several hours later. He did not examine the injection site, he did not speak to nor obtain any symptoms from Ilija. He admitted during his deposition that he never once read the Promethazine warning label or package insert prior to prescribing it for Ilija.

As the cruise line policy required, its ship doctor contacted the Cleveland Clinic regarding Ilija’s diagnosis, care and treatment. He tried calling twice and could not get through to anyone. Rather than continuing to call or obtain a vascular consultation, he simply stopped calling.

By the evening hours, the nurse was constantly massaging Ilija’s arm, hand and fingers, but the symptoms continued to aggravate and nothing on the ship could be done to slow the process. While Ilija’s tissues were rapidly being destroyed, the doctor and his supervisor on the ship were Googling what to do. They did not obtain guidance from the Cleveland Clinic. They did not get a vascular consultation. They did not call their chief medical director. They did not read the package insert for instructions and/or treatment guidance.

To compound his multiple errors, the doctor refused to even consider a medevac for this obvious medical emergency. Even his the cruise line’s chief medical director confirmed under oath that this was a breach in the standard of care.

It was not until the next day – 17 hours after Ilija’s first symptoms – when the ship docked in Port Canaveral that Ilija was finally allowed off the ship to seek the medical attention he so desperately needed. Only it was much too late. By the time he was taken off the ship, his arm was described by paramedics as ischemic, severely swollen, blackened, and mottled from the elbow to the fingertips. Cape Canaveral Hospital’s on-duty emergency physician noted that due to “obvious severe ischemia” from compartment syndrome, Ilija would need an emergency fasciotomy and that his prognosis was poor and amputation likely. Days later, after trying everything to save it, Ilija’s right arm was amputated.

State of the art medicine on cruise ships is creative marketing

All of us have seen cruise lines’ advertisements on TV and social media, touting fully staffed, fully equipped, satellite-connected infirmaries. The goal is to convince future passengers that you can achieve total peace of mind if you choose to cruise with us, because if there is a medical event of any kind, we are equipped to take care of your every need. On paper, it sounds good. In practice? We invite you to read this post from the beginning once more. A sick or injured person can be a patient at the best hospital in the world, but if the staff is second rate, all the bells and whistles are pointless.

The doctor who cared for our client was a 26-year old graduate of University of Caldas Medical School in Columbia. He was not licensed to practice medicine in the United States. The limited experience he had was at the Salamandra International Emergency Training Center which was not a clinical setting and was not actively treating patients. His only clinical experience was a limited stint in family medicine at the Salud Hospital in Columbia. That was it. With that paper-thin background he was employed as a cruise ship doctor charged with providing emergency medical care to all guests and crew aboard the vessel.

Over the next few months we will discuss glaring, sometimes fatal, shortcomings of cruise ship physicians whose care and treatment resulted in profound injuries to our clients. These injuries were often aggravated by decisions far more reaching than a regular family doctor makes. We will discuss questionable diagnosis, questionable decisions not to evacuate, questionable logistical decisions when evacuation is ordered, – and everything in between – all of which carried life-changing consequences for our clients.

Because Ilija was a crewmember, he was not permitted to file a lawsuit in U.S. Courts. Instead, his case had to be resolved through a process called arbitration – not before a normal court of law. In its decision, the arbitrator agreed with our position and awarded $3,337,500 to Ilija Loncar.

For decades our personal injury attorneys have litigated against cruise lines on behalf of passengers and crewmembers. Suing cruise lines for their doctors’ malpractice was however barred by the courts since 1988 – the Barbetta Rule. Thankfully in 2014 the courts set a new precedent in Franza where the majority rightfully stated: “We can discern no sound reason in law to carve out a special exemption for all acts of onboard medical negligence. Much has changed in the quarter-century since Barbetta.”

Our firm has handled many complex medical malpractice cases against cruise lines since Franza. Experience litigating these cases is paramount. Not only do we have to prove that malpractice was committed, but also that a viable treatment was available to the cruise ship. The latter part is where expertise in shipboard medicine and medical evacuations become the centerpiece of these cases. The short statute of limitations in some cases and the obligation to go through the restrictive setting of an arbitration hearing do nothing to simplify plaintiff’s many burdens.