This week in Rome, court-appointed experts have presented their 270-page analysis on what truly happened on the evening of January 13, 2012, which saw the cruise liner Costa Concordia hit rocks off the Tuscan island of Giglio and finished its course beached on its size. As a result of a series of the captain’s reckless decisions and Costa Cruise Lines’ incompetent employees, 32 people died that night. 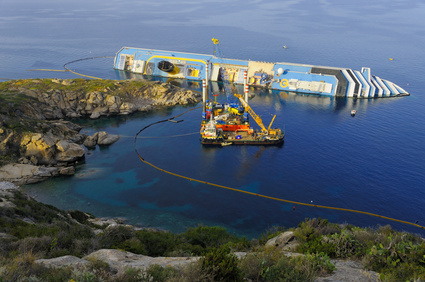 You can read Cruise Ship Lawyers Blog’s entire account and article on the incident of Costa Concordia here.

The court overseeing the criminal investigation in Rome, Italy, had named and ordered several experts to review the audio and navigational data extracted from the ship’s black box. On Thursday, experts turned in their extensive report to the court, which was leaked the same day in the Italian press.

The report is damning to say the least.

Captain Schettino’s Recklessness
The report points to the ship’s captain’s inability to grasp and fully understand what was happening. For well over 45 minutes, Schettino received reports after reports from his crew that the ship was flooding and the engines were dead. Despite the loss of power to the engine, the black out throughout the entire ship, as well as the ship dangerously tilting on its side, Schettino failed to give the “abandon ship” order.

The report also confirmed that when the “abandon ship” order was finally given, Captain Schettino may already have been on his way to safety. The black box revealed that the order was issued by another officer from the bridge, which is another violation of maritime rules.

Costa Cruise Lines’ Negligence
The court-appointed experts were also not kind towards the Cruise company owned by Carnival Cruises, based out of Miami, Florida. The report points to a serious lack of professional seriousness among the crew members and employees present on the bridge. The owner of the ship is blamed for delaying alerting coastal authorities about the incident, which further delayed any emergency and medical attention to the survivors.

The black box also revealed that crew-members on the bridge were having grave difficulties understanding each other and accomplishing the most simple tasks due to language barriers. Schettino joking with an officer that his poor understand of the italian language could result in the ship going “on the rocks” was alarming in the eyes of the maritime experts. Costa Cruise Lines is responsible for the hiring and training of officers trusted with the lives of thousands of cruise passengers. Yet, that night, on the Costa Concordia, passengers were led by a team of crew-members that did not understand each other, and whose lack of training and certifications, contributed to the loss of lives.

While the next hearing in Rome is scheduled for October 15, 2012, there are still cases being filed by american passengers in the USA. Below is a short AP video interview of Leesfield Scolaro’ maritime attorney, Robert Peltz: